We are a diverse, nonpartisan grassroots organization that believes upgrading our elections with Ranked Choice Voting is one of the most effective things We The People can do to address many of the seemingly intractable problems we face.

As the biggest and most diverse state in the U.S. and an economic powerhouse, California is teeming with opportunity and potential. It is also faced with some incredible challenges, from drought and wildfires to recurring budget shortfalls, from people living in poverty to an affordability crisis that impacts nearly everyone. To solve these challenges, we need a more effective and more representative government at the city, county, and state levels. Adopting Ranked Choice Voting across the state will help make that happen (find out how).

Driven by our volunteers and partner organizations, Cal RCV:

Cal RCV is led by an all-volunteer Executive Committee that includes Tom Charron, Jessica Montgomery, Jim Lindsay, Paul Copley, and Guy Cammilleri together with a number of advisors from the RCV movement in California and nationally. Additionally, Cal RCV has a number of teams focused on specific areas of importance:

Cal RCV works together with a number of organizations that support the expansion of Ranked Choice Voting, including Level Up California, Californians for Electoral Reform, FairVote, Rank the Vote, Unite America, RepresentUs, Veterans for Political Innovation, and many others.

Here is a small sample of the thousands of Ranked Choice Voting supporters that, volunteer, donate, and come to our ubiquitous Zoom meetings: 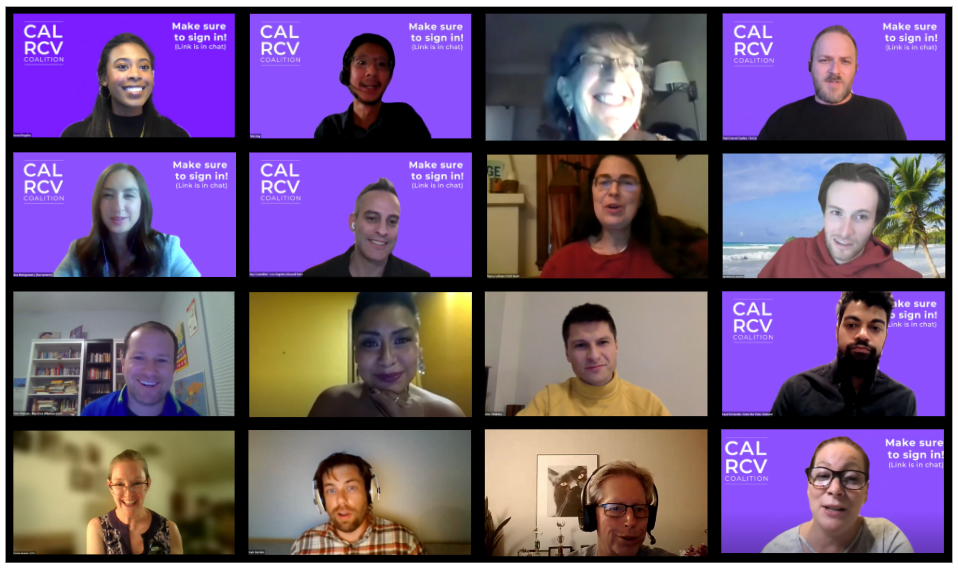