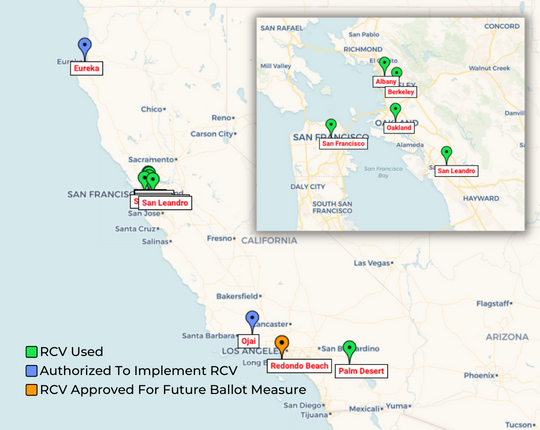 The 2022 Midterm Election is over, and although the results are still coming in, Ranked Choice Voting was used and voted to be implemented throughout the state.

- The Alameda County Registrar of Voters fulfilled their promises of promptly posting RCV results on the web, and continuing eliminations until two candidates remain.

- Albany had a multi-winner RCV election, also known as Proportional Ranked Choice Voting (PRCV). The final winners were determined by surplus transfers.  The candidates leading in the first round won.

- Although Eureka approved RCV via a ballot measure in 2020, they did not use RCV in this election because the Secretary of State would not certify their voting machines for an RCV election. However, this did not make a difference because every election was a race between two or fewer candidates.

- The Oakland mayoral race still has mail-in ballots being counted the latest results are here on the Official Election Site of Alameda County. As of Friday, November 11th, the race has gone 9 rounds, with 5 of the 10 candidates eliminated. Three candidates were above 10% in the first round. Also, in Oakland, the school board district 4 race had the first-round second-place candidate pull ahead and win in the second round.

- Ranked choice voting had a big win in Ojai with 56% of the voters saying yes to Measure M. The Ojai Valley Democratic Club led an army of volunteers to spread the word about RCV, putting door hangers on every single household.  The Ojai City Council now has the authority from the voters to adopt RCV at their discretion, and RCV could be used for their 2024 election for the first time.

- Palm Desert used RCV for their election for the FIRST time!  Voters used multi-winner PRCV to elect at-large city council members. Just like in Albany, the two first-round leaders are also leading in the final-round count. Full details here. RCV was enacted in 2020 via a lawsuit settlement regarding the California Voting Rights Act (CVRA) and the dilution of the Latino population.

- The Redondo  Beach City Council unanimously approved a motion for city staff to put together language for an RCV ballot measure. Two more key votes must occur for RCV to be adopted in Redondo Beach:

If you're interested in getting involved with Ranked Choice Voting in California, sign up to volunteer here or consider making a donation.