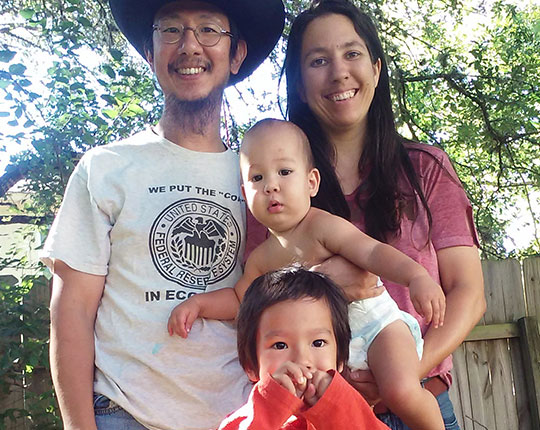 I stared at the screen in disbelief and wonder. This was all so much more than I could have ever expected or hoped for! It was so plainly obvious to me now what I had to do. But, let me back up for a moment…

It’s the early 2000s. I was a software engineer in the Silicon Valley and also a small-L libertarian blogger. I considered myself libertarian because I was convinced by Milton Friedman’s writings of the wisdom in using market-oriented policies to address economic and social problems. I also broadly agreed with Lord Acton's observation that, "Power tends to corrupt, and absolute power corrupts absolutely." Small-L because I considered myself rather moderate and pragmatic, more like a fiscally conservative social liberal than an anarcho-capitalist. As such, I registered as a Republican to support the likes of Ron Paul. And I was a blogger because I believed in the power of the Internet to spread ideas (that, plus I kept falling in love with my own words, I must confess).

I noticed there was such a strong representation of libertarian ideas in the blogosphere but not in elected representation. When I studied the problem further, which included a Comparative Governments course at the local community college, I concluded that it was due to our plurality voting system that created a two-party system largely due to the spoiler effect. This tendency is known as Duverger's Law, and the Founders weren't aware of it because, well, it wasn't discovered by Maurice Duverger until the 1950s.[1]

So, I learned about a variety of alternative voting systems that would address this effect, and for a while, my favorite was the Condorcet Method (it’s like a round-robin tournament), then Approval Voting, and Ranked Choice Voting (RCV) third. Like many mathy voting geeks, I preferred systems that did as perfect a job as possible of finding the centrist from a set of votes, and for that, Condorcet seemed to be the clear winner. I was actively blogging at this time and had planned a 5-part series on electoral systems, the first part covering plurality and the spoiler effect, the second one introducing RCV, and the third one illustrating the Condorcet Method, with the fourth and fifth covering Approval and then Proportional Representation (more on that later).

I did indeed write the first two, but before I ever got to writing the third post, someone changed my mind. Professor Matthew Shugart is a well-known comparative politics scholar whose name came up frequently in the sources I read during my research in my Comparative Governments course, and I was thrilled to see that he had a very active blog with open comments (and indeed, he still does and is also active on Twitter). I noticed that he mentioned RCV a few times in his recommendations, and I asked in the comments why he preferred that over Condorcet and Approval.

Professor Shugart explained that what I was missing in my voter-centric analysis was that a voting system also creates incentives for candidates to act in certain ways, and that they were more likely to reveal where they stood on controversial issues under Ranked Choice Voting (RCV). Under Condorcet and Approval, there are only incentives to be liked broadly and no incentives to be liked strongly, so this basically means candidates will want to hold their cards close to the vest to avoid being disliked by anybody. In contrast, RCV had incentives for both strong and broad support. By this time, I was in grad school studying economics, and given the field’s focus on the importance of incentives, the argument made total sense.

And so, I became a supporter of Ranked Choice Voting (RCV). Ever since my Comparative Governments class, I had also supported Proportional Representation (PR) where 20% of the vote wins 20% of the seats. PR can only be used for elected bodies with multiple people like Congress, and most political scientists view it as the main necessary reform to create a multi-party system (indeed, the complete version of Duverger’s Law states that single-seat plurality elections tend towards two-party systems and multi-seat PR elections tend towards multi-party systems).

However, it was impossible to get anybody to listen! Most people liked the two-party system, viewing it as more stable than multi-party systems. But I also could never get anywhere when talking to those who wanted third parties in office, such as other Libertarians. I spent much of my summer internship at the Cato Institute trying to win people over to PR and RCV, but nobody would listen. I guess Americans view anything foreign with suspicion and distrust, and since neither RCV nor PR was used hardly anywhere in the U.S. at the time, both reforms were viewed as foreign.

However, I did find a small group of like-minded reformers when I discovered Californians for Electoral Reform (CfER) and joined them. It was great to finally meet other people who had figured out the same things I had! Alas, I didn’t have a chance to get too deeply involved before we moved to Austin, TX and had a couple of kids. The kids occupied most of my time, and I wasn’t able to find any organizations in Texas similar to CfER anyway, but I did become a monthly donor to FairVote, a national organization that promotes both reforms.

Then we moved back to California, this time in Orange County. With the GOP shifting towards populism, what had been a socially and fiscally conservative party was now socially conservative and fiscally liberal, so I finally registered as a big-L Libertarian. And with the kids old enough to give me a bit more free time, I rejoined CfER. I didn’t notice this at first, but apparently, the political landscape had changed. With cities like San Francisco and Oakland and even New York City having used RCV, it was no longer viewed as foreign. Perhaps more importantly, the increase in polarization in the past decade had badly shaken many Americans’ attitudes about the two-party system being stable.

Jim Lindsay was my main contact at CfER, and he told me that he had joined a new group that I might be interested in. I was already pretty busy with the LP, so I was noncommittal, but he mentioned the launch meeting date, it happened to be at a time and date that I could make, and so I put it on my calendar. Come the launch date, I fire up Zoom, expecting a small number of voting geeks much like CfER was. To my astonishment, there were hundreds of attendees, and the organizers smoothly and professionally moved from presenter to presenter, which included some folks from CfER, but also from the national organization Rank the Vote that promotes RCV.

But I was utterly flabbergasted to see Rob Richie, the president and CEO of FairVote speak. To be honest, I was just too stunned to remember anything he said. What I do remember is that the energy and enthusiasm of everybody there was palpable through the screen. Not only did they have a large and diverse throng of committed supporters, but they also had a clear plan of action. I signed up that night both as a donor and as a volunteer, I was soon asked to be the Social Media Manager, and due to my blogging experience, I volunteered to help with the CalRCV blog as well, and indeed, that’s the reason you’re reading this now.

As I hope is clear, I’m absolutely thrilled to be part of this dynamic and inspiring organization, and I have never been so optimistic about the prospects of electoral reform in the US.

Felix Ling is a volunteer for Cal RCV's Policy and Research Team and Marketing Team.