Cal RCV In The News: Tom Charron Interview with The Fulcrum 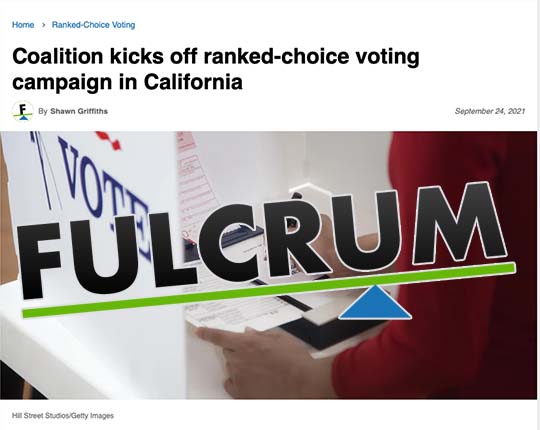 California RCV Coalition cofounder Tom Charron recently sat down with Shawn Griffiths of the Independent Voter Project to talk about ranked choice voting and the September launch of Cal RCV. The following is an excerpt of that interview with was posted to the IVP website, and later published on The Fulcrum. To read the entire interview, click on the link below the excerpt.

"There has been a lot of momentum in the state," said Tom Charron, who represented the group in a recent interview with IVN. "We've been seeing the results of ranked-choice voting, and the positive effects it has had on local elections, but what there hasn't been is the momentum at a statewide level."

Charron said the goal of the coalition is twofold: Over the long-run, achieve statewide RCV adoption, and, in the short term,offer support to local RCV campaigns to spread the use of the alternative voting method in the state.

Coalition members understand that getting RCV passed at the statewide level is going to be a long game. Garnering the support and resources to launch such an endeavor in the largest state will take time, accoding to Charron says.

To read the entire interview at The Fulcrum, click here: https://thefulcrum.us/Elections/Voting/ranked-choice-voting-california