VOLUNTEER VOICES: Because Your Vote Matters 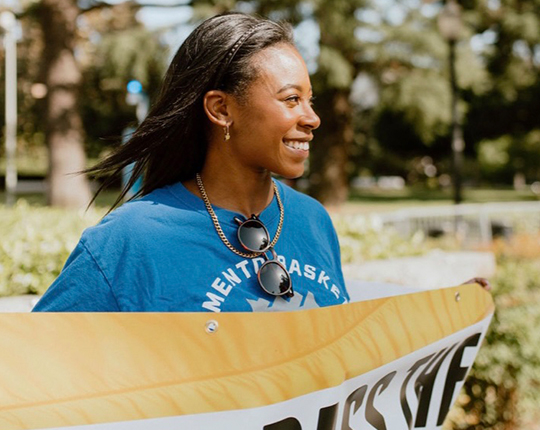 As a young adult, the question changes from what do you want to be to what do you want to do to materialize your love for a certain subject. When I was asked what I wanted to do at 17 years old, the best I could come up with was "I want to help people." I think it's very common to want to help others, but it can be difficult to figure out what personal skills you possess to make it happen. My skill set included communication, reading, and writing. Once I had those attributes identified, I quickly realized that applying them to a career path could potentially be difficult. That was until I took Government my senior year of high school. Every day, I was in complete shock that specific individuals are allowed to make decisions for the collective. Then I found out that even more people help direct, write, and encourage specific rules depending on the challenge. After learning those facts, the path was clear: I would help people via government and public policy.

Once I started to explore the world independently, I realized my passion was contentious. It made people anxious, confused, and sometimes even angry. There are plenty of tangible ways individuals can try to change those feelings, but when it comes to politics, your best bet is voting.

For most people, voting is something that happens every four years, and it rarely directly affects their everyday life. Those same people don't realize that local elections impact their daily lives a lot more than Presidential elections do. So what does any of this have to do with Ranked Choice Voting?

Well, a lot of people mistrust voting for (semi) good reasons. Either they haven't seen anyone they voted for win an election, or the incumbent is the only face they've ever seen in a certain position. Proportional representation can change all of that. Going into a voting cycle knowing that the most deserving candidate may actually be able to win would give a lot of people faith. Knowing that money isn't the main reason someone won an election would also encourage people to participate in elections. There is also more opportunity for individuals who deserve to run for elected office but may be hesitant due to the reasons mentioned.

That context helped me decide to become a dedicated volunteer for the California Rank Choice Voting Coalition. How, you might ask? Well, through political activism, of course. While volunteering for another organization, I met this wonderful woman named Jess. She told me that a new coalition was organizing in California, and I had to get involved. At the time, my only knowledge of Rank Choice Voting was from New York City's Mayoral election. So I had to do some research.
I discovered that my home state had already implemented Ranked Choice Voting in multiple cities, especially the Bay Area. So the second I saw that "more women (42%) and people of color (60%) ran in and won elections" (Represent Women, 2016) using Ranked Choice Voting, I was sold.

Since joining the coalition, I have been surrounded by passionate and brilliant California citizens like Jess who want to see our communities grow and prosper. Not only for us but for everyone that comes after.

Amari Mcgaha is an active Field Organizer and the Team Lead in charge of Diversity, Equity, and Inclusion for Cal RCV.